Motor Learning – Part 2: The Impact of Feedback by Alex Penner

[Alex Penner is the Director of Coaching & Community at Athletic Lab] 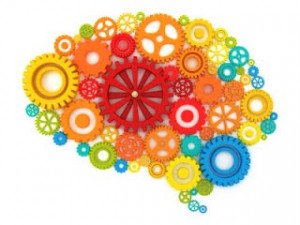 As discussed in the overview of motor learning concepts, athletes derive feedback both from within themselves (intrinsic feedback) and from their environment (extrinsic or augmented feedback) which includes interaction with coaches. In this article, we’ll focus primarily on how the coach can provide feedback to enhance motor learning.

Most coaches are well-meaning when giving feedback to their athletes.  They see their athlete struggling with a move or a concept and the tendency is to give them the solution. The athlete will generally see significant improvement within the session thanks to the coach’s help. Similarly, when your GPS gives you turn-by-turn directions, you can be very confident that you’ll end up at your intended destination. However, how comfortable would you feel navigating your return trip if your GPS unexpectedly broke? Without having to figure out the route to your destination in the first place, it’s unlikely you paid enough attention to what was relevant. In the case of our athletes, that’s the same situation in which they find themselves on the next occasion that they have to perform. For this reason, it’s crucial that we don’t spoon-feed our athletes in practice as it deprives them of the opportunity to learn.

Before exploring how to give feedback, let’s get clear on the goals of motor learning and how feedback fits in. Over time, we want to develop competence, consistency, psychological efficiency, and independence (Freeman, 2014, p. 17).  The end goal is the stage of automaticity, in which the athlete is able to perform movement skills correctly & consistently with minimal mental-effort, while having the ability to self-correct mistakes (Statler & Dubois, 2015, p. 156).  As the athlete learns and develops, the appropriate form and timing of feedback will change too.

As it relates to athlete awareness, feedback will provide the athlete either knowledge of performance (athlete’s execution of the skill), knowledge of results (the outcome), or both. Extrinsic feedback can be delivered in a variety of forms, often visual, auditory, or tactile. The coach plays a crucial role in providing direct feedback to the athlete through demonstrations, verbal explanations, or hands-on repositioning.

As the saying goes, “a picture is worth a thousand words.”  You can often communicate faster and more clearly via demonstration than description, so when possible, try to include some sort of visual when providing feedback (Freeman, 2014, p. 19).  Demonstration doesn’t need to be the coach, but could just as easily be a teammate or video footage. Also, keep in mind that visual feedback goes beyond demonstrations and includes your body language. In building trust with the athlete, it’s crucial that your nonverbal messages align with your verbal communication (Martens, 1987).

Tactile feedback is any information the athlete gets from contact or touch. This can be valuable for developing greater body and spatial awareness, helping the athlete to refine their positions and output. There are a variety of ways in which coaches may incorporate tactile feedback. One of the more obvious approaches is hands-on repositioning.  As a professional, it’s prudent that you first consider whether this is appropriate with your population and that you get permission before doing so.  Another approach that often helps people understand where they are in space is requiring them to make contact with some object at various points in a movement.  A common example in strength training is to use a box while squatting in order to reinforce the desired depth.

Verbal communication is probably the first thing that comes to mind when we think of feedback. Verbal feedback typically includes any or all of the following:

Feedback often includes information on the athlete’s performance or results.  Guidance may be the instruction or prompts before beginning the session or the cues that direct the athlete’s focus. Inquiry may be aimed at getting the athlete to problem solve, or perhaps to understand what the athlete is experiencing.  Additionally, effort and desirable behaviors should be encouraged by the coach.  Whether you are appraising the athlete’s performance or reinforcing it, always be specific about what was done well or what needs to be adjusted. Otherwise, it becomes unclear to the athlete what they need to change or keep doing (Smith & Smoll, 2012, p. 32). 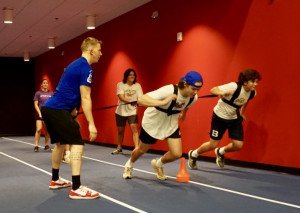 External cues are those which direct the athlete’s attention toward the intended outcome of the movement (Winkelman, 2018). Internal cues direct attention toward the motions of the body while executing the skill. The research comparing these two approaches has shown that the use of external cues leads to better acute learning AND retention than internal cues or no cues. Since external cues are outcome-oriented, they generally promote better intermuscular coordination and timing, leading to more fluid movement execution. Conversely, directing focus toward the component parts of the skill can often disrupt the execution of the skill as a whole, making it choppy and inefficient (Statler & Dubois, 2015, pp. 160).  Great external cues incorporate action verbs or analogies that are embedded with the spatial and temporal qualities of the movement. For example, the words “punch” and “push” convey similar movement patterns, but “punch” implies a level of speed or power that “push” does not (Winkelman, 2018).

When delivering feedback, aim to cue toward better execution rather than away from errors. For any given skill, the potential faults are numerous (perhaps unlimited). If an athlete makes an error, it’s better to tell them what they should aim to do rather than what they should avoid (Everett, 2009, p. 186). This feed-forward process directs their focus on future actions rather than previous mistakes (Smith & Smoll, 2012, p. 37).

Remember that extrinsic feedback doesn’t need to come directly from the coach.  The coach can manipulate the constraints of the task or environment such that the athlete gets feedback without the coach having to utter a word. For example, consider a weightlifter who has an issue with their bar path that leads to them jumping forward during a snatch. The coach could attempt to demonstrate or cue them out of the underlying error. However, the coach could also change the task by requiring the athlete to snatch without their feet leaving the ground. When the athlete commits the same error, they lose their foot placement, indicating the need to adjust. Conversely, a successful lift lets them know they did something right. Alternatively, the coach could take a different approach by changing the environment.  Perhaps the load on the bar is light enough that the athlete is able to “make the lift” with inefficient technique. In this case, the coach may keep the exercise (task) the same but increase the load on the bar enough that errors become apparent to the athlete in the form of missed lifts. In these scenarios, knowledge of results and knowledge of performance become linked. This environmental feedback will enhance the athlete’s awareness and ability to self-correct, helping them progress from dependence on the coach to independence.

It’s important to understand both when and how often to provide feedback.  Concurrent feedback, information provided during the task execution, enhances performance but impairs learning, so it’s better to use this in a competition setting rather than during practice.  In contrast, feedback provided after the task (terminal feedback) enhances motor learning and thus, it is a better choice for practice settings (Statler & Dubois, 2015, pp. 171-172). This gives the athlete a chance to try solving the problem independently before getting the coach’s input.

How often to give feedback is not as straightforward. More frequent feedback enhances performance, while less frequent feedback enhances motor learning (retention). However, the appropriate frequency is dependent upon the difficulty of the skill and the level of expertise (Statler & Dubois, 2015, p. 172). I remember Mike Young saying once in an Athletic Lab staff meeting, “Don’t over-coach the slow movements & under-coach the fast ones.”  Athletes generally learn the simpler & slower movements quite rapidly, needing only minimal feedback beyond the introduction. As they show competence, feedback may transition from an emphasis on position to emphasis on intention (such as moving the bar as fast as possible). However, with fast & complex skills, such as sprinting and olympic lifts, learning tends to take place over an extended timeline, warranting a longer period of frequent feedback.

Keep your feedback concise to avoid overwhelming the athlete. There is only so much an athlete can attend to at once, so it’s best to limit the number of instructions you provide or the number of errors you attempt to correct during the session. There is already a high cognitive load on the novice athlete or the athlete attempting a new skill, and on top of that, they are likely making numerous errors with every attempt.  They need to develop an awareness of what they are doing right or wrong, which is where coaching can help, but don’t try to fix everything at once. Aim your feedback at addressing the one or two errors that…

…lead to other technical faults, and

When the athlete reaches the point at which they can identify their errors and self-correct, encouragement alone is sufficient when they make a mistake (SOURCE, Psych).

Giving feedback is both an art and a science. There are general trends in what is effective, but it’s important to recognize that athletes are individuals. There are no universally effective cues. What works well for one person may not be helpful for another, so it’s important to get to know your athletes and how they learn.  Remember, the end-goal is a competency, consistency, and independence.  Spoon-feeding doesn’t foster independence, and information overload only confuses athletes. Keep communication clear, concise, and concrete, and use task and environment constraints when appropriate. Perhaps most importantly, recognize that your approach to giving feedback must evolve as your athletes progress.