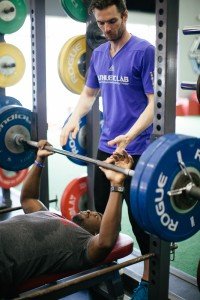 [Robert Duncan achieved his bachelor of science in exercise science from Appalachian State University  and masters in Kinesiology and Sports Studies from East Tennessee State University. He has participated in multiple internships with high schools, at the collegiate level, as well as in the private sector.  Robert is currently a part of Athletic Lab’s coaching mentorship program]

Why exactly do people go to the gym and resistance train?  Whether it is to improve performance in sport, change body composition, or to get “tone” you may not be training with the right intensity to optimally stimulate a hypertrophic response.  Muscle hypertrophy is the technical term for muscle growth, and it refers to the increase in the size of your muscle cells. The most efficient way to produce a hypertrophic response is high-intensity resistance training, equal to or greater than 80% 1RM and eccentric contractions at 100 – 120% 1RM. It is at these intensities that integrated electromyographic activity has been shown to increase. This elevated neural activation contributes to an increased muscle tonus, an electrophysiological phenomenon, and to strength gains early on in the training period, with muscle hypertrophy contributing to further strength increases later in training. With the increase in the cross-sectional area of a muscle being directly correlated to the increase in maximum force production potential of the muscle. Muscle tonus refers to an increased ionic flow across the cell membrane and gives the muscle a firm appearance. Thus, if toned muscle are the goal, strength is the best method for achieving this appearance.

**Based on Epley Equation

While sport performance is important to only a small portion of the population, the value of high-intensity resistance training and the hypertrophic response it elicits should be desirable to everyone. Skeletal muscles primary task is locomotion, but they also regulate whole body metabolism. It is also well known that after the age of 30 years old the degradation of muscle mass increases. With the loss of muscle mass potentially leading to disability, loss of independence, and increased risk of mortality, the maintenance of muscle mass is recognized as a determinant which directly influences an individual’s quality of life. The inclusion of high-intensity resistance training has the potential to benefit everyone by countering the naturally occurring catabolic effects of aging.