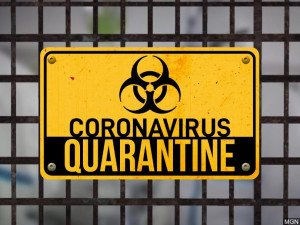 We can see the light at the end of the tunnel. There is still some uncertainty, but athletics are beginning to come out of pandemic hibernation. Here in North Carolina, professional and collegiate athletes have begun training, the NBA just released a plan to resume activities, and several European soccer leagues have been active for a few weeks. Eventually, youth and high school sports will begin to open back up as well. When training is finally able to resume as “normal,” our instincts will be to dive right back into where we were pre-pandemic, but it is important to approach our preparation with thoughtfulness. This article may be geared toward return to sport, but the principles still apply to the general fitness enthusiast as well.

What type of impact could we expect to see after this period of interrupted training? Many of us have been doing something, but we haven’t had the access to the full gym experience for two months now. It only takes approximately four weeks to observe a 4-14% drop in aerobic capacity (5). While we might be able maintain strength for 2-3 weeks, after eight weeks, there could be a 7-8% loss in strength (6). Additionally, Kubo and colleagues found that after an eight-week detraining period, tendon stiffness returned back to pre-training levels (3). Basically, we will not be able to sprint as fast, jump as high, or run as far. 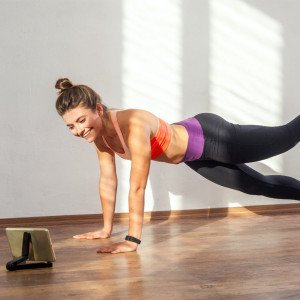 Hopefully, training and preparation hasn’t completely halted, but to some extent, it has been disrupted. How athletes, and the regular gym member approach return to training has the potential make an outstanding season or cause a season-long battle with nagging injuries. Like cramming a semester’s worth of studying into a single night to prepare for a class final, making up the last two months of training in a couple of weeks is not the best strategy for long-term success. Though there are still a couple of months before the traditional preseason, as a result of the training disruption from the “stay-at-home” orders, everyone- athletes and regular members alike- would be best served approaching a return to training like coming out of offseason.

Knowing our membership base, I am confident that many of our members have continued to follow some training regimen. I would compare this to coaches providing a summer program for their teams.  Athletes are largely left on their own to complete these programs. When it’s time to report for training camp in August, there are 15-25 individuals spanning a wide spectrum of fitness levels. Despite the offseason plans, injury rates are still highest during preseason (2). It has been hypothesized that returning athletes are unable to handle the training stress that is placed on the body. The “at-home” plan just isn’t the same as in-person training and full team practices.

To highlight the need for a progressive approach of a return to training, I’d like to call some attention to a few headlines from the last month. With just 10 days of full team training, the Bundesliga, professional German football league, reported 14 injuries after the first weekend of matches. In response to the injuries from the first weekend of Bundesliga matches, former Arsenal physiotherapist suggested that the Premier League could see similar numbers if clubs don’t allow time for proper preparation. Even professionals who may have never stopped training are in agreement. Manchester City FC star, Raheem Sterling was quoted for insisting that the Premier League needs four to five weeks before the first game.

We know there is a need for a progressive return to training, but how do we go about it? 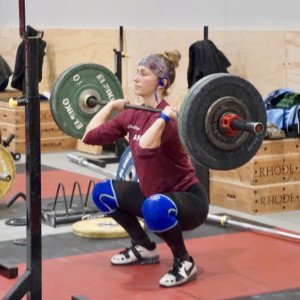 In the summer of 2019, the National Strength and Conditioning Association and the Collegiate Strength and Conditioning Coaches Association came together to publish guidelines for coaches on best practices for programming a return to training for athletes (1). The guidelines outline three scenarios for returning to training: 1) returning athletes who have experienced a 2 week break or longer or for student athletes who are beginning under a new head sport coach, 2) new athletes such as freshman or transfer student-athletes that are coming off a period of inactivity, or all student-athletes who are beginning under a new head strength and conditioning coach, and 3) student-athletes returning to training after an incident of exertional rhabdomyolysis or exertional heat illness.  For this article, I would like to focus primarily on scenario one, those coming off of a two-week break or longer.

It is important to note that regardless of the scenario, the first step to returning to training is a pre-participation medical evaluation by a qualified professional. Once cleared for activity, a logical place to start is assessment, whether it be a test of endurance, strength, or both. If performing a conditioning test in the first week back, the guidelines suggest reducing the total workload by 20% (1). Workload can be reduced through just about any means, including reduced intensity, volume, increased rest time, or combination of these three variables. If the conditioning assessment is performed the second week back, it is recommended to decrease the workload by 10%. Using the 12-minute run as an example, if performed in the first week back, the test would only last for 9 minutes and 36 seconds. This test performed in week two would last 10 minutes and 48 seconds.

Often, preseason practices consist of high volumes of conditioning to quickly elevate athlete fitness. Counter to that, the NSCA/CSCCA guidelines recommend that conditioning activities in week 1 be reduced by 50%, followed by a 30% reduction in the second week after the period of inactivity. Remember, these guidelines are for returning athletes. For new athletes, including transfers, week three would consist of a 20% reduction, followed by a 10% reduction in total weekly volume in week four (1). 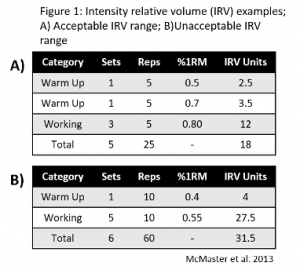 When it comes to the weight room, the guidelines reference the FIT rule for weight training. The FIT rule outlines recommendations for frequency (F), intensity relative volume (I), and time of rest interval (T). The suggested frequency is no more than three days per muscle group for week one and four days per muscle group on week two (1). If a split body (upper/lower) routine was programmed, the athletes could theoretically lift six days in the first week. Most of our programs are full body, which would limit the weight training to the base recommendations.

Intensity relative volume (IRV) is a strategy for quantifying the relative intensity of the weight training session. It is calculated by the equation: , and includes warm up sets. Based on a review paper by McMaster et al., it is recommended that IRV units per movement or muscle group stay between 11 and 30 during the first two weeks (4). Figure 1 demonstrates an appropriate and inappropriate IRV example.

The last part of the FIT rule is time of rest interval, or work:rest ratio. Typically, rest during a weight training session will be more than sufficient; however, the Joint Committee sets the minimum standard of 1:4 work-to-rest for the first week back, and 1:3 during the second week (1). Figure 2 summarizes the FIT rule as outlined in the previous paragraphs.

In summary, after a period of inactivity or disrupted training of two weeks or more, athletes should not dive off the deep end into training. We may not be in preseason yet, but there has definitely been a disruption in normal training over the past two months for a majority of athletes. Returning programs should progress volume, intensity, and density over two to four weeks preceded by a pre-participation medical evaluation to ensure the safety of those participating.