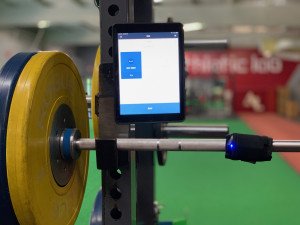 As strength and conditioning coaches, understanding how our athletes are responding is of utmost importance, namely understanding work intensity and fatigue management. There are many ways to monitor fatigue. Some are more intrusive, such as blood cortisol levels, while others, like Relative Perceived Exertion (RPE) and repetitions in reserve (RIR), are subjective and easy to assess, but leave room for high degrees of variability. One easy and objective method of monitoring that is becoming more popular is Velocity-Based Training (VBT).

Researchers have been exploring the relationship between barbell velocity and its relationship to relative intensity, or percentage of 1 repetition max (1RM) for quite some time now (2, 6, 8, 10). Briefly, by determining the relationship between velocity and the percent of a 1RM, you can determine an athlete’s Load-Velocity Profile (LVP). This can help prescribe relative training intensities on a given day, accounting for accumulated fatigue from previous workouts and it is the foundation on which velocity-based training is built upon. For the sake of this article, I am not going to go into much more detail on LVP, but if you would like more information on the ins-and-outs, you can find it on one of our previous blog posts here.

Before moving on, there are a few considerations that should be mentioned when discussing the use of velocity-based training. First, the more individualized a LVP, the more accurate your profiles will be (4). If it isn’t feasible to create a profile for each athlete, it is possible to scale the LVP based on position group, or team. Another consideration to be aware of is that velocity may be associated with relative strength (4, 5). A study performed in 2019 found that stronger athletes may have greater velocities less than 75% 1RM and slower velocities above 95% 1RM (5). One possible explanation being that a relatively stronger athlete may have greater movement efficiency at lower intensities and the ability to achieve true max at higher intensities. Therefore, athletes with less strength tend to gravitate to the middle of the velocity curve.

If we stopped here, the application of LVP would be limited since typically, three reps or less are used to create the profile (14). Specifically, it is suggested that only one rep is used once the athlete reaches 0.65 m·s-1, which is approximately 75 – 80% 1RM (11, 14). This makes sense from an assessment perspective, where fatigue must be mitigated to elicit the most accurate results. From a training perspective, where a certain amount of fatigue is needed for adaptation to the imposed demand, this LVP is not very helpful. It has been reported that at 75% 1RM, after just five reps, there was a significant drop in velocity when performing repetitions to failure (9). Furthermore, from my own data of 23 swimmers performing five reps at an average intensity of just 61% 1RM, there was an average decline in velocity of 10% (0.66 m·s-1 to 0.59 m·s-1). What I am trying to get at is this question: “How do I use velocity to help program volume and intensity to induce appropriate fatigue?” 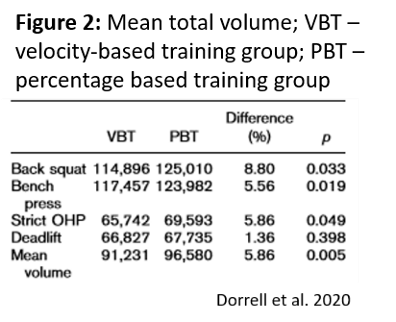 Taking velocity-based training one step further, coaches can provide velocity-stops as a means of auto-regulation. Essentially, this means I can prescribe a load corresponding to the muscular trait that I want to develop (i.e. hypertrophy, absolute strength, power), and in addition to that load, I provide a terminal velocity. The athlete would then perform as many reps in that velocity zone as he/she could. Once the velocity drops below the velocity-stop, the set is completed. This would be repeated for as many sets as I have programmed. This method of auto-regulation, with a velocity stop of 20% less than target velocity, has been shown to elicit equal or greater improvements in the back squat, bench press, overhead press, deadlift, and countermovement jump with nearly 6% less volume when compared to traditional percentage-based training (3).

The velocity stop method may be effective; however, trying to implement this in a team sport setting with 15 to 25 athletes at one time may prove to be challenging. Athletes who are trying to do the math in real time provides an added distraction and a possible loss of focus on lifting technique. Even if paired up in a rack or platform with another athlete, the general distractions of team sports could prove to be a significant hurdle to adherence, but not entirely impossible. Additionally, differences in volume from athlete to athlete could add some confusion. 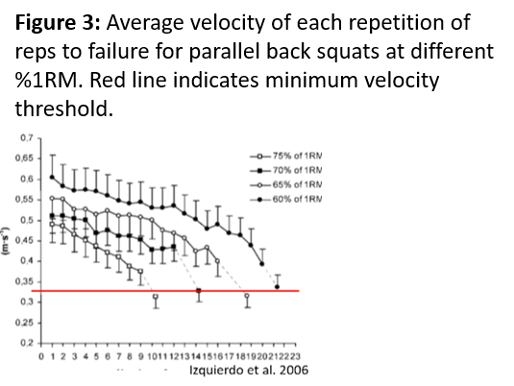 One interesting fact regarding barbell velocity and its relationship to intensity is that there is a concept called “minimal velocity threshold.” This means that the minimum velocity for a given movement, such as the back squat, is the same for a 1RM and the final rep of another given RM (9, 12, 13). If performing a 7RM, a 4RM, and 1RM, the velocity of the last rep will be nearly the same for each protocol. Now, I can begin to answer the question I posed above: “How do I use velocity to help me program volume to induce appropriate fatigue?” By monitoring velocity, it is possible to estimate how close an athlete is to failure (12). It should be noted that these velocities are movement specific, meaning squat velocities only apply to squatting, while bench press velocities apply to the bench press, etc. Now, instead of asking the athlete to figure out what a 20% decrease in velocity is mid set (or 30-40% depending on what muscular trait to be developed), I can rather provide a specific stopping velocity. This is where velocity-based training gets exciting.

At this point, two forms of auto-regulation are beginning to merge together. The first is Reps in Reserve (RIR) and the velocity stop method. Using RIR, coaches ask their athletes how many reps could be performed before failure. While this is a valid form of auto-regulation (8, 15), it is still subjective, leaving room for greater error. Recently studies have examined the relationship between RIR and velocity and a strong relationship was found (1 ,7, 12, 13). Remember, the velocity of the final rep of different rep maxes is similar, but now we know that the velocity of 1 rep in reserve of a 6RM (5th rep) and 1 rep in reserve of a 3RM (2nd rep), is nearly the same. Finally, in culmination of all these forms of auto-regulation, Balsalobre-Fernandez et al. found that 92-94% of the variation in %1RM could be associated with velocity, RIR, and RPE (r = 0.96-0.97 depending on the movement) (1).

Starting to put the pieces of the VBT puzzle together, we see that through monitoring barbell velocity, we can observe and adjust absolute load to match desired relative intensities. Additionally, we can establish velocity-stops to estimate how close the athlete is to failure after a programmed number of reps. Using the NSCA’s repetition max chart in conjunction with the RPE/RIR chart suggested by Zourdos and colleagues, a training table can be formulated to establish target starting velocities and velocity stops. This can allow coaches to estimate fatigue, while providing athletes with objective feedback on relative intensity on a given day.

Below is the table I am suggesting, using squat velocity reported from a literature review as an example. Across the top of the table, you have the number of reps, and to the left side is a slightly modified version of the RPE/RIR chart. The final column is the velocity stop for a given intensity. The middle white section of the table is the target initial velocity for the first rep of a set. The first row of velocities should line up with the appropriate intensities for the given rep max. This means initial velocity for a 10 RPE/0 RIR for 3 reps should be approximately equal to 93% 1RM. 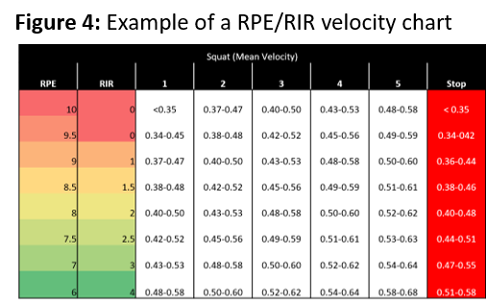 As previously mentioned, the more individualized this table is, the more accurate the velocity should be. In the appropriate training phases, 1RM, 3RM, 5RM, and even 10RM can be assessed to create a comprehensive LVP. Without pre-existing data, I created velocity zones using regression prediction intervals for both initial and final velocities to provide a general target for athletes to achieve. Once the target velocities have been established, programming can include sets, reps, and RPE/RIR. Athletes can refer to the table to see where they should be starting and stopping. With experience, athletes should have a general idea of the appropriate load for the initial velocity, but one or two warm-up sets will allow even novice athletes the ability to gauge the weight needed. Below is an example of programming using the RPE/RIR, which would then be referenced to the velocity table.

Training consists of many facets. As a coach, the more variables I can control, the better I can regulate and enhance the performance process to help the athlete achieve maximum potential. Load-velocity profiles provide valuable insights into the status of the athlete while providing objective feedback into important variables such as fatigue and work intensity. By pairing the objectivity of the principles of LVP and individualized responses to training that RIR and RPE provide, coaches can manipulate training with high degree of confidence.