[Julia Zwierzynski is a graduating senior at the University of North Carolina at Chapel Hill studying Exercise and Sport Science. Julia is participating in the Athletic Lab coaching mentorship program.] 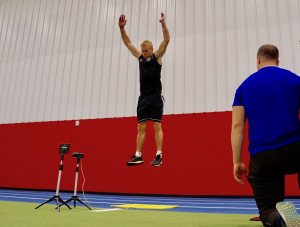 Generally, fatigue is the inability of a person to perform at their maximal level of performance due to physiological or environmental factors (Halson, 2014). Fatigue is a normal component of General Adaptation Syndrome. When the body is exposed to physical stressors such as exercise, fatigue occurs. Normally, the body then adapts to the stressors in order to deal with them more efficiently in the future, and the initial fatigue is overcome. Fatigue frequently occurs in athletes, but only when it is excessive and chronic does it start to inhibit performance. Excessive fatigue leads to injury, pain, and exhaustion (Clark et. al, 2012).

Fatigue can be measured in a myriad of different ways, including internally perceived measurements such as RPE as well as physiological measurements like heart rate, blood pressure, and hormone concentrations. One common method of measuring fatigue is with tests of maximal effort. For example, a maximal vertical jump test. A maximal vertical jump test is easy to administer because it requires very little experience or equipment. Ideally, athletes should experience zero fatigue and be in peak condition during their competition season. They should be able to perform to their maximal level. Therefore, a test of maximal effort during competition season is a good way to measure fatigue, because any negative differences between the maximal level of performance and the results of a test of maximal effort would indicate fatigue (Halson 2014).

Fatigue should be monitored and minimized in order to keep athletes competing at as high of a level as possible. Fatigue measurements from a maximal vertical jump test can be used to monitor and manage athletes’ workload. In a study conducted on men’s collegiate soccer players, player fatigue was monitored and workload was successfully managed in order to maintain the players’ maximum squat jump height over the course of their competition season, despite increasing workload (Sams et. al, 2018). Measuring fatigue is a very important part of managing workload and maintaining athletic performance. Athlete fatigue should be monitored and minimized by increasing or decreasing workload and workload intensity.

In short, fatigue is a complex condition. It occurs for many different reasons and in many different ways, which makes it very difficult to measure accurately. However, it is clear that fatigue can play a large part in hindering athletic performance. For a competitive athlete, it can be very beneficial to monitor fatigue in order to manage training load throughout the training cycle, but especially during the competitive season. A maximal vertical jump test is one good way to measure fatigue, but whenever possible should be combined with other methods, including but not limited to athlete-reported fatigue measurements and other physiological measurements.